For those of you who have family and friends opposed to abortion, voted for Trump in 2016 and now are struggling to justify a Biden vote, the following is from a pro- lifer’s post explaining WHY she is changing her vote in 2020. You may find this helpful.
From an ardent pro-lifer;
“I have felt a heaviness in my soul lately. 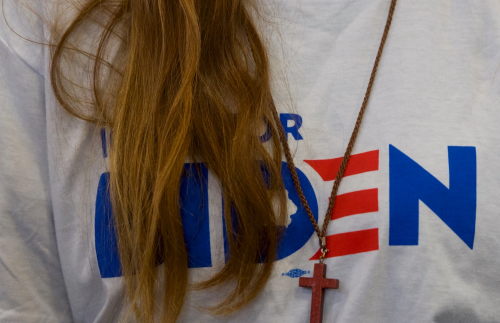 For the past couple weeks, I’ve felt it. A weight. The heaviness. So this morning – when a block of time unexpectedly opened in my schedule, I closed myself in my room, read some of John’s gospel, opened my journal, and prayed, “OK, God. What is it? My heart feels heavy. I need to write. But I don’t have words. What is this feeling?”
And I began to write – Heartbreak. It’s heartbreak. And disillusionment. I’ve been here before – so many times since 2016. And here I am again.
I keep seeing Christians say they can’t vote for Joe Biden because of his stance on abortion. I’ve seen Christians proudly state they are single-voter issues – it all comes down to abortion. So they’ll vote for Trump. Because he promises to appoint Supreme Court Justices who will overturn Roe v. Wade.  That’s the one and only thing that matters.
But why? Why is that the one and only thing that matters?
Is that the one and only thing that matters to Jesus? Reading through the Bible, I would say unequivocally “NO.” What does the Bible say directly about abortion? And I ask this from my pro-life heart. The Bible has FAR, FAR more to say about pride, about abusing power to mistreat the poor, about lying, about treating others with hatred, about humility, about seeking forgiveness, about faithfulness — about ALL of that than it does about abortion.
So, Christians, why are you so willing to toss all of those morals aside? Why are you so willing to turn a blind eye to so many behaviors that are completely, blatantly in opposition to the heart and character of Christ?
When I read about Joe Biden’s stance on abortion, I see a man who has wrestled with his faith. I see a man whose heart wants no abortions and who has struggled throughout his years in public service to determine the best way to accomplish that. Is it by making abortion illegal? (At one point, he said “yes.”) Is it by prohibiting government funding of abortion? (At one point, he said “yes.”) Or is it by supporting public policies that make abortion rates decline? (This seems to be where he’s landed.)
This personal wrestling resonates with me. I have had those same wrestling matches within myself.
Did you know – between 1981 and 2016, the sharpest decline in abortion rates occurred under Democratic Presidents – not under Republican Presidents. The rates especially dropped under the leadership of President Obama and continued to decline after he left office. Most everyone agrees the reason for this is because access to contraception is key in preventing pregnancies. And under the Affordable Care Act, contraception coverage became more widespread. Even though some states enacted new abortion restrictions between 2011 and 2017, by 2017 57% of the nationwide decline occurred in states that had not enacted new abortion restrictions. So there is evidence that pursuing legal action isn’t necessary (or effective) to reduce the amount of abortions.
I am pro-life. I would like to see zero abortions. I also want to honor and value the lives of women who find themselves in the position of considering abortion. Those lives also matter to me. So I don’t believe criminalizing the choice is the best way to truly help those women. I think public policies that offer help and hope — financial and medical – are the best ways to reduce abortions.
Therefore, I need to find political candidates who will support programs that help the women who are most likely to feel that abortion is their only option, candidates who support making effective contraception affordable and accessible to everyone.
I also want a candidate who values all life. Refugees’ lives. Women’s lives. Black lives. Poor lives. Lives during a pandemic. The lives of people who disagree with him.
You see, when you say you’re voting for Trump because you’re pro-life, I can’t take you seriously. Because Trump has not proven himself to value lives. For the love! – read his Twitter and show me how this man values life.
When you say you can’t vote for Biden because of your Christian beliefs, I can’t take you seriously. Because again and again and again, Donald Trump’s words and actions fly in direct contradiction to the character of Christ.
For the past four years, I’ve been so disillusioned and heartbroken and sad to see so many Christians abandon their morals and contort their beliefs in order to justify their support of someone who so obviously violates every moral and value I was taught in the Church.
Somewhere along the line, political masterminds decided that evangelical Christians could be manipulated into believing abortion and gay marriage are the only two things God cares about.
Friends, that is a lie. You have been hoodwinked.
Obviously, you don’t have to vote for Joe Biden. But you can’t use our Jesus and the Bible to defend your support of Donald Trump.
Opposed to abortion justify Biden vote.

How You Vote is How You Treat People. There's Only One Ethical Choice on Tuesday.

The Mercy of Abortion: What Republicans Get Wrong About Late Medical Terminations